← more from
Ghostly International
Get fresh music recommendations delivered to your inbox every Friday.
We've updated our Terms of Use. You can review the changes here.

I Could Be Your Dog (Prequel) 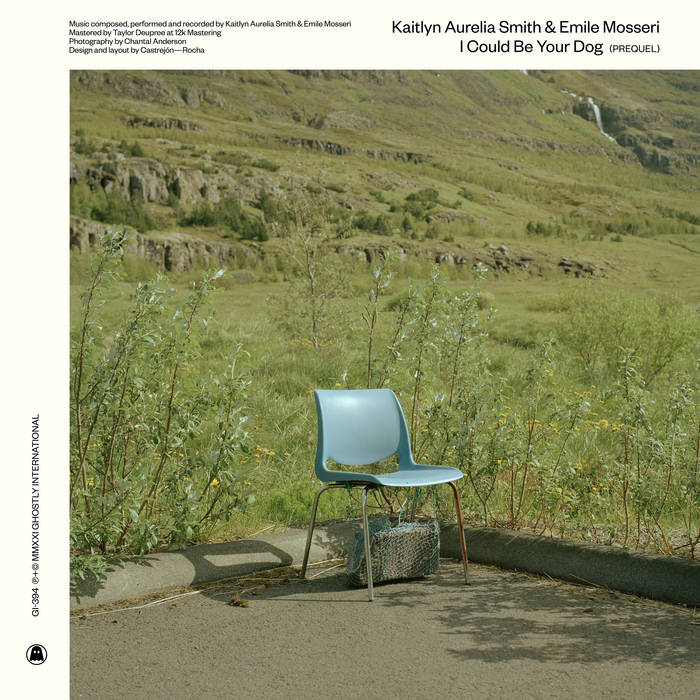 Adam Kocher This is such a beautiful record. I am completely hypnotized.

"His music filled me with the urge to connect with the world," Kaitlyn Aurelia Smith says of Emile Mosseri. She first heard his work while watching the 2019 film The Last Black Man In San Francisco; just minutes in, she paused it to look up who did the score and wrote to him immediately. "I love Emile's ability to create melodies that feel magically scenic and familiar like they are reminding you of the innocence of loving life.” Those talents saw recognition in 2020 with an Oscar nomination for Mosseri’s original score to the film Minari. He was already a fan of Smith’s and became increasingly intrigued by her impressionistic process as they started to talk. "The music feels so spiritual and alive and made from the earth," Mosseri says. "I think of her as the great conductor, summoning musical poetry from her orchestra of machines." I Could Be Your Dog (Prequel), the first installment in their two-part collaborative album, introduces an uncanny fusion of their sonics. Constructed using synthesizer, piano, electronics, and voice, this soft-focus dream world is lush, evocative, and fleeting. It finds two composers tuning their respective styles inward as an ode to mutual inspiration, a celebration of the human spirit and its will to surrender to the currents of life.

Early into their correspondence, Smith and Mosseri realized they were neighbors in Los Angeles and met up for a few hikes. Their conversations led to a musical exchange over email. The exercise became a sketch, the start of their first song together, "Log In Your Fire,” with Mosseri finding flourishes in Smith’s cathartic synth lines to intonate and harmonize alongside. Lyrically, it's a beautiful, open-ended sentiment. "Being a log in someone's fire, to me, means letting go, and surrendering to that feeling," says Mosseri. From there, the pair composed a series of musical foundations, trading files from afar, nurturing the eventual expansion as the remote days of 2020 set in. Smith likens the collaborative experience to the exciting uncertainty of starting a garden, "doing what I can to facilitate growth while enjoying the process of being surprised by what will actually grow."

I Could Be Your Dog (Prequel) moves fluidly from track to track, panning through textural vignettes. At just 17 minutes, the set evokes the bittersweet sense of something too bright or rare to last, a short-lived glimpse into a golden hour. "Moon In Your Eye" sends a choral refrain skyward; we stay behind, watching it haze away in the heavens. "Brush" bubbles with Smith's characteristic wonder and curiosity, expressed in a flutter of horn-like sounds, leading into the album's central expression, its titular track. Above pulsing harmonies, in his tender falsetto, Mosseri repeats variations of the mantra, "I don't want to feel / lost anymore /I can’t make you what I am." He says the idea they are reaching for is more abstract and universal, "It could mean I could be your friend / buddy, I could be someone / something else, I could transform, I could be your companion, etc. What I like about it is it could change based on what that means to you, or what the word dog means to you."

The liveliest moment is "Blink Twice," an orchestral march of 'oohs and ahhs' that could register both triumphant and tragic. The closing piece, "Moonweed," strays closer to the latter, with low and slow piano keys guiding the alien hums of a starlit goodbye. There is a dreamy, elemental intention to this music, which Smith and Mosseri say came naturally, as they both embraced intuitive interplay throughout their creative back-and-forth. The stylistic threads of each composer are recognizable yet ambiguous, sewn into a singular vision. "I'm so grateful that my musical ideas could dance with hers with some grace and harmony," says Mosseri. Smith adds that this experience helped her "remember that music can be a connecting layer of friendship, especially in a time when the usual ways were out of reach."